Meeting the one who is ‘the other’

National identity has risen to be a topic particularly in the political rhetoric. What it consist of is difficult to define. The differences between the nations and the people can anyhow engender a rich starting point to creativity and innovations, if only we can be curious and respect the ones that we think are “the others”.

Summer can be a delightful cious time. During the last two weeks I have been drinking my morning coffee on a terrace in 22-degree heat while the locusts were chirping. This is Provence, which offers remarkably warmer weather than Scandinavia this year. I have been lucky because I have had the opportunity to spend a few weeks in this little village in the French countryside. I prepare my morning coffee with French beans bought from the local Carrefour shop, but I use a typical Swedish coffeemaker. The heat, the smells, the food, the wine and the atmosphere let me recognize the French. At the same time I myself feel unusually Swedish. With a certain pride I consider that I have made the coffee with a typical Swedish coffeemaker despite the fact that I myself do not have I even have such a brewer at home similar one in Sweden.

The phenomenon of identity becomes very clear and tangible ose and clear when you meet one who is ‘the other’. I am more proud of my Swedishness when I meet someone whom I perceive as very French. In academic literature the concept of identity has been used and understood comes across in many different ways. Within disciplines such as The same is true in psychology, social psychology, sociology, political science, anthropology, cultural sciences among and in many others fields of science. 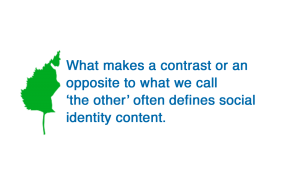 Social identity can give meaning to differences

While drinking my coffee here it is particularly meaningful to think of my identity not so much a stable internal structure of mine but rather, with the help of the so-called social identity theory, as something I classify myself as belonging to—some social category. When thinking about my situation, there are two clear categories: the French and the Swedish. In line with the claims of Just like the statement about the social identity theory, defining my social identity as Swedish is more pertinent rises up more clearly when I meet someone or something I perceive detect as ‘the other’. In this case it is France and everything, which in this case I associate with it.

My social identity depends not only on my similarity to t belongs, not only with those like me, but also my identity can create meaning to the differences between the French and the Swedish. I am using the aforementioned contrast to recognize my Swedish identity and to consider myself a proud Swede. My clear identity at the same time is exactly what gives me the opportunity to evaluate and respect all I consider French (such as wine, food, nature and atmosphere). My identity while I am experiencing myself as ‘the other’ (from the French I meet) becomes more of a resource than a hindrance and gives me the chance to evaluate what I encounter. This naturally works only so long as I feel there is no threat to my Swedishness despite feeling a potential threat comes as much from my own mistrust as from any real threat here in Provence.

Today one can see complicated identity dynamics in many places. Identity has become the starting point to significant political statements. We have Trump’s ‘America First’, we have Brexit, but we also have complicated movements in both Sweden and Finland. The national movements in both countries seem to lift a particular national identity to the surface. It is hardly possible to define the basis for national identity. This is not surprising if you take social identity theory seriously. It defines the content of social identity, not based on what our group contains but based on what makes a contrast or an opposite to what we call ‘the other’. In other words I define my social identity, my Swedishness on this beautiful morning, more based on what I experience as French than on what I think I have. The content of identity is always partly changing and dynamic even though we try to hang on to names and labels.

The concepts of Finnishness and Swedishness speak to us immediately 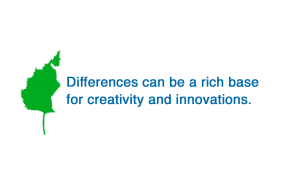 Nationalism tries to describe ‘the others’ in a negative tone. It argues that meeting ‘the other’ is a potential threat to social identity. Yet this works equally well in the opposite direction. Though I feel secure in my Swedish identity (which this morning took shape as an extremely temporal contraption via a Swedish coffeemaker), I can be curious about, detect and experience creativity while meeting the French. In the same way, the possibility of joining different social identities and the ability to respect and evaluate them creates a central base to creative and dynamic interaction in multicultural Scandinavia.

Being Swedish or Finnish is not the only interesting thing in this. At the same time, the concepts of Finnishness or Swedishness speak to us immediately when there is a long line of variations (Finland’s Swedes, the Swedes who speak Finnish etc.). We have a long joint history. In addition, there are deep, important differences. The differences can provide a rich base to creativity and innovations. We can avoid the simplifying rhetoric of nationalism to defend the ones who are our own; we can direct outlooks actively towards the ones we observe to be ‘the others’. As the chairman of the AGSLO:s group dynamic organisation, I allow this topic to inspire me on this French morning to decide that I shall work with this during the coming work year.

Facebook
Twitter
LinkedIn
PrevRedundancy – What it does to people *
Portraying humans: roles in everyday life and in theatreNext