Portraying humans: roles in everyday life and in theatre

The roles individuals play in life are essential building blocks for their identities, and new kinds of roles may even at best increase their quality of life and their possibilities to make a difference in society. The research project Art as work and as a working tool has studied how one grows into the roles of artists and performers during the theatre project of the young and which kind of consequences the process has to the individuals. The themes of the theatre project that was followed in the study, the centre were among others on inclusion and exclusion, belonging to or not belonging to different communities, taking part and being deprived and the treatment of young people in their working lives and their positions in society in general.

Describing everyday social interaction with terms borrowed from the theatre is an established tradition in many academic fields. For instance, the concept of role has connected theatre-makers and anthropologists ever since the 1920s. We may in fact claim that the social roles of everyday life are ultimately little different from the fictive roles played on theatrical stages: it is all about the portrayal of human characters and the variety of cultural skills involved in the process.

Roles are necessary tools for all human communities: they are ways of coordinating cooperation, knowledge about appropriate and effective ways to interact with others in different situations and environments. The roles individuals perform are also central building blocks of their identities.

But how does one learn new roles? Is it perhaps even possible to recognize the kinds of roles that increase the flexibility of individuals’ identities

Our research project “Art as work and as a working tool” that the Kone Foundation funded has had a unique opportunity to follow how young adults gradually grow into the roles of artists and performers, and how this process affects the individuals. We have been studying a summer job project that each summer has hired about ten young adults (aged 18–22) to work with professional artists for six weeks. The Kiasma Theatre’s URB urban art festival launched the summer job project in 2011, and has lately organized it in cooperation with the city of Helsinki. Theatre-maker Elina Izarra Ollikainen has led it with a yearly changing partner. Each summer, the project has resulted in a stage performance that has been part of the URB festival’s program. The participants have contributed to the ideas of these works, produced much of the materials and played the stage roles themselves. 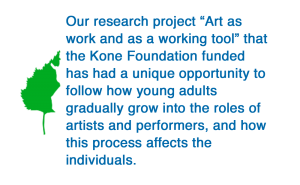 The joint voice of the group

A typical characteristic of the summer job groups has been a diversity of ethnical, linguistic, cultural and socio-economic backgrounds. That is, they have represented the new variety of Finnishness in many ways. The experiences and everyday roles of the participants have produced the themes and ingredients of the artworks through writing tasks and group discussions, for instance. Many of the recurring themes revolve around inclusion and exclusion, belonging to and integrating into communities, the treatment of young people in the labour market and in society at large. The works have also touched upon darker topics, such as racism, war, terrorism, death and mental health problems, but have also done so for the shinier sides of life.

The art projects have offered the participants a natural opportunity to encounter otherness: the kinds of individuals and types of persons they might otherwise never have met, whether because of prejudices or social distances. Minor schisms and conflicts have probably arisen every year, but the work has always finished. Indeed, one of the most important gains for the participants has undoubtedly been the genuine chance to commit to the group and to the common project—and to make their joint voice publically heard through the stage roles. 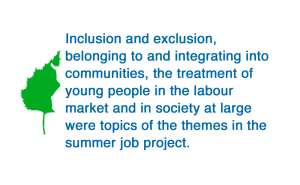 Under the guidance of professional artists, the participants have had the opportunity to learn deeply about art-making. Gradually, the role of artist makes it possible for the participants to take a new kind of stance towards their own life and identity. The role of artist is a position from which one can examine even one’s most painful experiences in a new light and transform them into raw materials for artistic expression. In the role of artist, one can also observe oneself more analytically and more critically as a figure on society’s stages and as an object of others’ attitudes. In the spirit of the philosopher John Dewey, one may view art as a tool for reflection that allows us to examine our worlds of experience and to illuminate those norms and values that underlie the cohesions or conflicts in different communities. 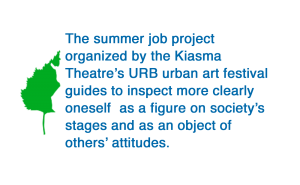 Different artistic traditions also offer very concrete techniques of role enactment. The participants of the summer job projects have learned, for example, methods of writing and video photography as well as Chekhovian techniques of acting. Techniques of acting strengthen and expand the expressive capacity of an individual, including gestures, facial expressions, movements and voice. At the same time, these techniques increase awareness of one’s body, its affordances and boundaries, and the associated cultural meanings. Through these means, the participants also develop the skills to interpret others, to coordinate one’s actions with those of others, to build on the ideas and impulses others offer, and to act under the gaze of the audience.

In other words, such techniques mould people in a more flexible direction both cognitively and bodily. And the effects are not limited to theatre only. While learning to portray a fictive character, one almost necessarily learns something fundamental about the roles humans play in everyday life as well. The more skilled one’s performance is, the more paths will most likely open up.

According to the participants’ feedback, the summer job has taught them new social skills, relieved their stage fright and given them new insights and directions in their lives. In other words, artistic work has multiple and multilevel consequences in society on top of the actual artworks produced. The summer job has also encouraged many of the participants to seek education in the field of arts. One participant even landed a minor role in Aki Kaurismäki’s new film, The Other Side of Hope.

Even if the main goal of our research project is to document and to analyze the summer job project using humanistic and social scientific research methods, we also hope to change attitudes and to expand people’s ideas of the significance of artistic activities and artistic expertise in society.