Redundancy – What it does to people *

In our society work is a source of self-esteem, of social gratification. The loss of a job, therefore, means that the whole structure of the meaning of their life collapses. Redundancy results in profound bereavement as if the redundant were mourning their own death.

Work allows for the efficient use of one’s muscular and intellectual capabilities and results in a well-integrated ego which enables people to control or alter their environment. In our society, work is a source of self-esteem, of social gratification, the fulfilment of an ego-ideal, the attainment of the role of mature adult, the useful and pleasurable utilisation of time and the achievement of psycho-social success. Getting a job, holding a job, advancing in a job, retiring from a job, or losing a job become significant human concerns.

Aggression and destructive energies are sublimated in work. These energies have to serve society, otherwise societies could not survive. Work represents a fight against something, an attack upon the environment. The farmer ploughs the earth, he harrows it, tears it, pulverises it; he pulls out weeds, he cuts them or burns them; he poisons insects and fights against drought and floods. To be sure, all this is done to create something, that is why it is called work and not rage. The destructiveness is selectively directed and a net ‘product’ is obtained. 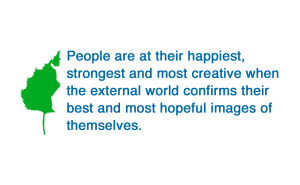 Work is both a psychological and a sociological concept. Work is mostly done in groups and is therefore essentially a social activity. Our society is primarily job-minded. Work socialises and civilises people. Work may be viewed as fulfilling a religious duty; it may be pleasurable, creative or have an inter-personal texture. Threats to livelihood and self-preservation are experienced by deep fears and feeling of loss and grief. Redundancy results in profound bereavement, not from the loss of others, but from the loss of self. Familiar habits of thought and behaviour no longer make sense. Everything has gone and bereavement destroys the individual as if they were mourning their own death. Involvement in one’s job has a bearing on the individual’s capacity to survive the loss of a job. For many people, their work is linked to their identity and self-esteem – ‘this is who I am’. The loss of a job, therefore, means that the whole structure of the meaning of their life collapses. People are at their happiest, strongest and most creative when the external world confirms their best and most hopeful images of themselves; and they are at their most miserable, disturbed and weakest when the world confirms their worst fears about themselves. Redundancy and unemployment result in many losses, particularly if the job was enjoyed. Even if it was not, the opportunity to earn money, the conferring of status, the fact that time was ordered in a familiar way gives meaning and purpose to a person. 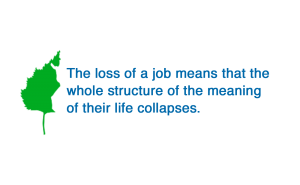 Studies of the impact of unemployment on individuals and families reveal a similarity to the description of grief after bereavement in the different phases of reaction after the loss of a job: the phase of shock: the phase of denial, the phase of anxiety, distress and anger and the final phase of resignation and adjustment. For the unemployed, as time goes on they develop an inertia that is psychologically debilitating. This inertia includes depression, boredom and laziness and feeling de-skilled and unworthy. The life of unemployment is characterised by increased physical and mental ill-health, increased numbers of suicide, marital strife, divorce, alcoholism, drugs misuse and death. 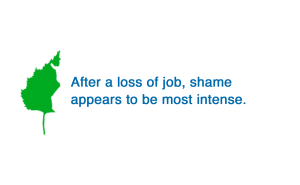 Shame is strongly associated with unemployment. After a loss of job, shame appears to be most intense, because people have grown up with a work ethic that dictates that one would never expect to be out of work until what used to be considered a normal age for retirement. Shame is defined as a feeling of humiliation, made worse by guilt or short-coming, of having made oneself, or being made, ridiculous, or having offended against propriety, modesty or decency. Shame is a sense of displeasure about the status of oneself, of having no significance. The experience of shame is one of shrinking away from others and pulling inward and downward. The centre of the self is diminished and the shamed want to disappear or to hide because of loss of dignity and loss of power. Shame grows with unnatural vigour when aggression cannot be used to counteract it.

(*) This post is a short version of “What redundancy does to people”, published by Mannie Sher in the Journal of the British Association of Psychotherapists, Autumn 1997.