Finland has a small population and, in most important tasks, everybody knows each other. It is considered that the strength of Finland is equality and how we share joys and sorrows together without the cultural heritage of a class society.

This is why it is weird that every important event has separate sections for VIPs and limited seats for common people, beginning from the celebrations of the Day of Independence on December the 6th. Invitations to the Presidential Palace are eagerly waited, and they are shown off on the channels of social media. Envy as a chronic national trait has not vanished. A person would hardly participate in Facebook or Instagram if he or she did not know the feeling of envy. At least one assumes that someone is envious of him or her, which increases their feelings of being a unique person. 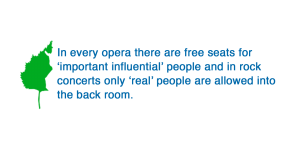 In almost all events of public power the culture of ‘VIP’ seats and less important self-paid seats or seats is supported by public funding. Neither culture nor sports makes an exception. Former top athletes with their new companions and misses and academic gurus receive VIP treatment in their field of Finnish events. Often ‘important’ people are the same faces behind glasses of sparkling wines and plates of meatballs, not those with real expertise in their field. They represent the ‘court’ of their own field, which circulates around them and keeps up the attention economics. Envy and hierarchies together with elitisms build up easily in Finland: There is not the smallest reception of a village committee that does not offer VIP seats. The organisers of ‘important’ or ‘self-important’ occasions make sure that every attention-pursuing event has elitist features. We love events where people are waiting or caused to wait while someone ‘important’ says something ‘significant’ to us. The culture starts from our mother’s milk; it is learnt at home from communion and graduation celebrations to weddings and funerals. We are waiting while someone ‘more important’ than us expresses something ‘significant’ and ‘meaningful’ even though we ourselves could think about these matters better and more vividly. 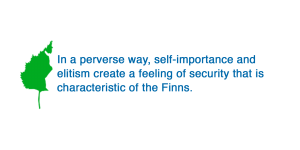 The Finnish Broadcasting Company YLE (8.7.2019) published news of the Dane Kira Peter-Hansen who started as a Member of the European Parliament (MEP). When arriving to the plenary hall, she immediately had to deal with the rules of parliament. In cafes there could be different queues for MEPs and assistants while others had to stand in long queues. In one café, no others than MEPs were allowed. ‘It’s important that my generation is being informed how really politics and decisions are made here and what direction the EU is going. This is not only a question of institutions or pointing to top positions’, she says and continues: ‘Horse trading may estrange young electors.’

Kira’s example shows us how embarrassing the elitist culture of plus-50 people is where the event organiser creates rules that quarantine people by different queues or entrance criteria. At the same time, the 30- and 40-year-olds are introduced into the realm of self-importance or at least pointed out the customs by which to proceed. It is amusing how the same societally influential persons who in front of media representatives underline equality and include everybody in real life most enjoy these routes for important people, whether it concerns a private or public event. 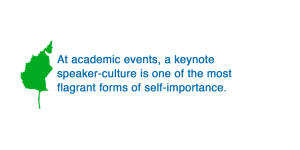 A ‘guru’ is offered to talk confusedly past the topic at the same time when he is being listened to by a researcher who has paid her participation fee and who quietly thinks how she knows considerably more about the ‘guru’s’ topic herself. The ‘guru’s’ talk is of course being praised because he exercises power in academic decision-making bodies.

In Finland, any societally important event can be open to all buffs and experts. If someone wants a greater experience and better service, he could sponsor it himself. Then the refrains of speeches would be equivalent to practical actions and the basic forms of Finnish self-importance and elitism with good brother networks would burst.